This Budongo Forest reserve is one of Uganda’s mostly known Forests which is located approximately 3 hours’ drive northwest of the capital city “Kampala” on the way heading to the prominent Murchison Falls National Park. It is known to be the biggest Mahogany forest found in the whole of East Africa as well as habitat to number of chimpanzees throughout Uganda.

Its major tourist sites within this forest are: the Kaniyo Pabidi Ecotourism site, Busingiro Ecotourism site which are located at boundaries to Murchison Falls National Park and dominated by Mahogany and Iron-wood trees. The 115 kilometer expanse is a remote chunck of the Budongo forest. Its isolation once in a while offers a safe haven for the Lions, Leopards as well as Buffaloes.

Early in the morning is the ideal time to set out touring because then you will have high chances to find a number of the forest inhabitants setting out to different places in the forest for day feeding.

Since this forest is habiting a lot of wildlife primates there are several activities you can do while in this Forest which include bird watching, Chimpanzee tracking and more.

Bird Watching in Budongo. This Forest is rated to be among the top birding sites in Uganda with different both easily and rarely seen bird species, over 360 bird species are recorded sightable in this forest thus rewarding you an amazing birding Safari in Uganda.

During the birding safari you will not be limited to only sighting different bird species but you will have a chance of sighting other mammals plus insects which include over 290 butterflies species, 465 tree species, 130 Moths species, and 24 mammals nine of which are primates. Some of the Bird species which rank Budongo to be among the top birding sites in Uganda include the Yellow-footed Flycatcher common within mature forest, however today it is extremely rare to see.

Chimpanzee Tracking. Budongo Forest is not only good for bird watching but also best site for Chimpanzee tracking although there are rarely seen but it’s a habitat for these closely human related primates. These primates are rated to be most closely related to human being features and behaviours, they are black in color, tailless with palm of hands and their fore limbs are longer than the lower limbs. Expect to be reward with a fantastic Chimpanzee tracking activity while in Budongo Forest Reserve. Starting from October to January there is scarcity of fruits in the forest so these chimps move a lot in the forest to different places in search of what to eat so the chances of seeing them during this period drops up to about 50%.

On you chimpanzee tracking activity you will be close to nature which include big tree species, shrubs and other features like insects which include butterflies, tsetse flies and more, reptiles which include snakes, lizards and more plus different flying bird species situated in your location. 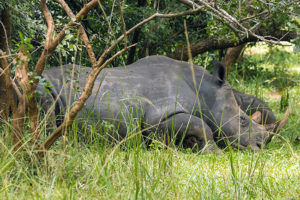